Welcome to WeWin Community organization (wewindao.com), whose platform was built on Web 3.0 blockchain technology, with its research and development started in the U.S. since February 18, 2021.

After a year of development,  100 billion WeWin tokens have been issued on QuicksWap, 120,000 virtual real estate NFTs have been minted and tradable on Opensea, and a proprietary Verifier reward model was successfully launched on March 15, 2022 such that the value of each Verifiers’ contributions to the WeWin community is commensurate with the amount of WeWin tokens plus the WeWin virtual real estate NFTs earned.

Joining as a WeWin Verifier is easy and only requires a software service fee of $100, and each newly joined Verifier immediately receives a WeWin Mansion NFT and 200 WeWin tokens daily, and is able to earn multiple rewards as pioneers, team leaders and partners.

No product purchases required and no logistical overhead, the WeWin token rewards will be deposited into each Verifier’s cryptocurrency wallet and tradable on QuickSwap when the WeWin community army reaches 100,000 total verifiers.

The WeWin army has exceeded tens of thousands of members in just over two months, and one US public company and one soon-to-be-listed company each has subscribed 10% of the total market value of WeWin tokens equivalent to US$100 million.

More Verifiers are flocking to the WeWin project every day for the goal of 100,000 Verifiers in six to nine months.

When WeWinMeta is launched as the next phase, Verifiers will automatically become VIP members, not only to receive reward air drops totaling 500 million WWC tokens every year for 20 years, but also to enjoy more virtual asset NFT rewards.

When each of the four phases of development has been completed, the market value of WeWin tokens would reach $10M, $100 million, $1 billion and $10 billion respectively. WeWin will empower entities in the field of metaverse dapps and create greater value for society, enterprises and individuals, and its goal is to reach $100 billion US dollars in valuation

If you have not joined Wewin yet, please click on the referral link https://team.wewin.net/replica/Wewin to join and turn your dreams into reality.

If you have already joined WeWin, simply replace the userID at end of the referral link to your own userID, and share this article to social media such as Google, Facebook, Twitter, WeChat, etc. All your contacts are encouraged to join WeWin and register in your team..

Let us join forces to build, collaborate, govern and prosper together!

What is the mission of WeWin?

The days of “going to the office” are now a thing of the past. The COVID-19 pandemic has further promoted the lifestyle of working from home and anywhere. As society becomes accustomed to the digital economy, digital organizations in the post-epidemic era have become a new form of business entity, using advanced technologies such as blockchain and decentralized apps to enable people to work, contribute, and make money for digital organizations anytime, anywhere.

Developed by well-known American computer experts and Indian software high-tech teams, and operated by a well-known international market team, Wewin is a decentralized digital economy community that combines blockchain technology, recommendation review mechanism, and digital tokens. . The purpose of Wewin is to build a win-win situation and achieve a common prosperity. The power of Wewin is a real interpersonal network composed of a global team of auditors. The value of Wewin is to gather global talents who are interested in marketing, realize the effective combination of blockchain technology, digital economy, and entity empowerment, and truly achieve our win-win situation.

Wewin token is an encrypted token that can be traded on a decentralized exchange, with a total amount of 100 billion.

How to join WeWin?

A grain of sand forms a desert, and a drop of sea water forms an ocean. verifiers gather together into a win-win career!

Wewin uses an verifiers recommendation mechanism. To apply to become a Wewin verifiers requires an existing verifier as an introducer, agrees to Wewin’s community service and privacy terms, and pays $100 as an audit fee.

What are the unique traits of WeWin's reward mechanism ?

There are 4 components to the WeWin Reward Mechanism.  The maximum reward pool size for each component  is equivalent to 10B WWC each.

Is the promotion of WeWin platform in compliance with regulations??

WeWin project is fully compliant.   Due to that there is no need to purchase WeWin tokens, the Verifiers receive WeWin tokens based on their contributions according to the reward mechanism of the WeWin platform after paying $100 registration fee.

How can I get started ?

Please browse tutorial below to get started:

The main chain of the Wewin Blockchain is launched when the number of verifiers reaches 100,000, and the verifiers who hold 10,000 Wewin tokens automatically become the equity miners of the Wewin Blockchain. The Wewin Chain is based on the node composition of the share certification mechanism, and the 500 million Wewin tokens issued each year will be allocated to the verifiers who are the owners of equity miners.

As the number of verifiers on the Wewin platform grows, 2.5% of the verification fee will be used to repurchase Wewin tokens. Half of the Wewin tokens will be distributed proportionally to current Wewin token holders after the Wewin tokens are launched on the centralized exchange, and the other half will be permanently destroyed to keep the Wewin tokens deflationary, both of which aim to make a lot of money Reward the holders of Wewin tokens.

How to setup MetaMask Wallet and add WWC Token ?

How do I check real-time WWC token price and how to set up my wallet to purchase WWC?

You can securely buy or sell WWC with ETH / USDC / USDT from you Polygon Wallet at :

Please follow tutorial below on how to properly make WWC purchase on QuickSwap with your MetaMask wallet :

How can I Support WeWin Project ?

WeWin Project has just started and will  definitely appreciate all gestures of support !

1. If you are an influencer,  help spread the word by promoting WeWin Tokens on Twitter, Facebook or any social platforms of your choice.

2. If you are a Marketer,  you can earn WeWin tokens as reward by becoming a verifier on https://wewin.pw.

Can I Top up / Refill my eWallet with a credit card?

You can register 5,10, 20, or 50 new Verifier accounts on your team’s behalf by following steps below:

You can register 5,10, 20, or 50 new Verifier accounts on your team’s behalf by following steps below:

Can I Pay for my registration fee directly with a credit card?

You can pay for your membership fee with the following link:

1.  Make payment at link above and capture screenshot of payment confirmation.

4.  Wait for approval and your account should be activated within 24 hours.

Can I Pay for my registration fee with USDT ?

1. You can pay membership fee or your eWallet credit with USDT from your crypto wallets. Please select the correct receiving wallet address with correct network.

* For USDT on Tron TRC20 Network, please send to
TMN6AB95qTPs4KU5dSrDyBibVrnRF4cJwc 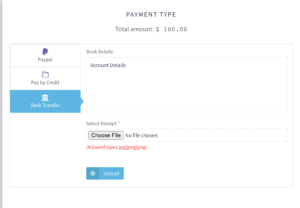 4.  Wait for WeWin Admin approval and your account should be activated within 24 hours.

Can I Top Up/Refill my eWallet credit with USDT ?

1. You can top up/refill eWallet credit with USDT from your crypto wallets. Please select the correct receiving wallet address with correct network.

* For USDT on Tron TRC20 Network, please  send to
TMN6AB95qTPs4KU5dSrDyBibVrnRF4cJwc

How Do I Update My Personal Information and Settings?

Login to WeWin -> Click RightTop User Icon -> Click Profile -> At Top of Page you can Upload your user Icon and Banner background image.
Here You can update your Login Password or Transaction Password.
At the bottom of page you will find several sub-menu tabs, Here you can find and edit your personal information, contact information, bank details, payment details (crypto wallet), and general settings.

How to Update my Polygon Wallet Address on my WeWin Account?

1.Please first follow steps below to set up your Polygon Wallet :

-> Scroll down to section ” Payment Details ”

How to display your NFTs on OpenSea.io

How to recover my wallet addresses on MetaMask ?
How to Set up Coinbase Wallet App and Display my WWCs and NFTs?

How to add text to wewin video with clips App?